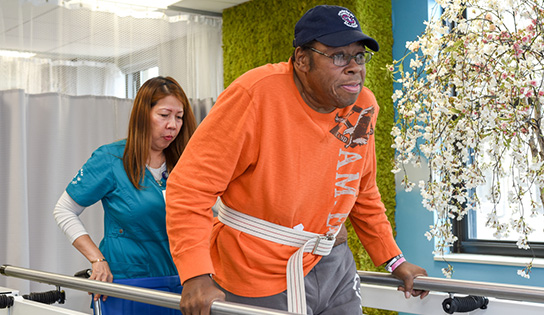 Details of Experience:
72-year-old, Louis S. arrived at our community, Cortlandt Healthcare, seeking physical therapy for his recent diagnosis of bronchopneumonia and muscle weakness. During treatment, Louis S. was in need of physical therapy six times a week, the therapy was directed at maintaining his muscle strength and balance.

The initial goals that were anticipated were to safely ambulate 75 feet using a rolling walker, then to increase to 150 feet with assistance. Another goal was to successfully go up and down seven steps. If all of this was completed, Louis would have a safe discharge home.

The next goal to accomplish was to overcome the stair climb; a goal was set of seven steps. With some time, he was able to achieve the seven steps while holding either side of the handrails. When speaking to Mr. Louis S. he explained that his time here as a “big experience.”

Louis S. continued to share, “physical therapy went very well. My therapist, Bob, is my buddy. He did beautifully and he helped me out so much. Nursing has been very good, and they always helped me out.” Overall, Louis S. stated, “Everything went perfect and I am very happy.”
Louis was successful in his recovery and rejuvenation and was escorted home with a smile. We are proud to be a part of his journey, and only wish him the best of luck throughout. Thank you for letting us join you on your journey, Louis!