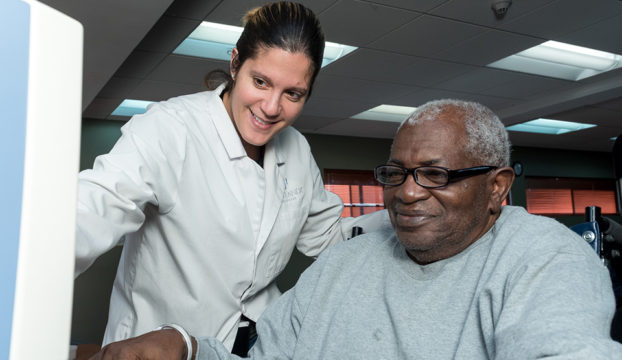 Several studies have reported that patients who are treated in comprehensive multidisciplinary post-acute care facilities in comparison to general care environments see significant improvements and gains in their functional status.

Acute hospital stays due to stroke are often short stays and do not include intensive rehabilitation. The primary focus of acute care providers is to stabilize patients in preparation for varying levels of post-acute therapy upon hospital discharge.

Between 70% – 88% percent of patients who suffer from ischemic stroke have some degree of motor dysfunction. Recent heart health studies have also shown that 52% of individuals who have suffered from stroke had no residual weaknesses with participation in stroke rehabilitation at six months. Recovery from sensory-perceptual and cognitive deficits generally follows the same pattern as motor and language difficulties.

What is the likelihood of recovery?

Recovery from motor, sensory, and language deficits commonly take place within the first three to six months after the stroke. There is a great emphasis on beginning rehabilitation practices early in the healing journey, as patients will often see improved outcomes if therapy is begun as soon as the patient is stable The severity of disability status one month post-stroke is generally a reliable proxy for the final outcome. Improvements can occur many years after stroke in a cooperative patient with an intensive rehabilitation program.

What are some of the training approaches in stroke rehabilitation for motor weakness?

There are various motor training approaches for patients who suffer from motor weakness after a stroke. Task-specific training often means that new skills must be taught, and motor activities must be performed differently than before the stroke. Constraint-Induced

Movement Therapy (CIMT) is an intensive technique where the unaffected hand is “constrained,” usually using a mitt. This forces the patient to use the stroke-affected hand in intensive functionally related tasks. Randomized controls trials have shown that daily intensive CIMT training was superior to “usual” care in a group of subjects three to nine months after stroke.

An important goal for patients recovering from stroke is ambulation. Severely affected, training often begins with the parallel bars and then progresses to “over-ground” ambulation with assistance.

Patients are encouraged to place as much weight as possible on the paretic leg. A hemi-walker or wide-based quad cane may be used as the patient improves, progressing to a narrow-based quad cane or straight cane if possible. A popular technique is partial body weight support with or without treadmill training. In this technique, the patient’s body weight is partially supported in a harness to allow a relatively normal gait pattern. Many stroke patients benefit from an orthosis (brace), most commonly an ankle/foot orthosis (AFO).

What medical complications are often seen in stroke rehabilitation?

Patients who have had a stroke often have atherosclerotic risk factors including hypertension, diabetes, and heart disease, all of which can become medical issues on the rehabilitation unit. A small percentage of patients can have a recurrent stroke, and some can develop a seizure disorder as a consequence of the stroke. Urinary tract infections are the most common infection during stroke rehabilitation, pneumonia (often associated with aspiration), and pressure ulcers. Many of these can be prevented. Early foley catheter removal can reduce the risk of urinary tract infections, upright posture and supervision during feedings can help prevent aspiration, and proper positioning in the bed and wheelchair can prevent pressure ulcers. During stroke rehabilitation, the most feared complication is pulmonary embolism ( a potentially life-threatening blood clot into the lung) which can occur in 1% to 3% of patients.

Dysphagia involves disruption of normal swallowing mechanisms and affects normal eating. Aspiration is one consequence of dysphagia and should be suspected in patients with stroke who cough or choke when swallowing, develop a wet or “gurgly”; voice, have an impaired cough associated with the absence of gag reflex or have recurrent pneumonia. Bedside examination of swallowing is frequently done by nursing staff or speech-language pathologists and identifies between 42%-80% of patients subsequently determined to aspirate on videofluoroscopy. Half of the patients who aspirate have no symptoms at all (“silent aspirators”). Swallowing disorders following a stroke usually improve fairly quickly, but if not, a diet modification should be considered.

Urinary incontinence is common following stroke, with an incidence ranging from 38%-60% in the early recovery period. Incontinence has been correlated with the size of the stroke, degree of aphasia, presence of dementia. A careful urinary function profile should be created, listing the volume of fluid intake, frequency of volume voided, and post-void residual volume. For patients with large residual volumes after urinating, intermittent catheterization may be indicated. Fortunately, incontinence usually improves with time, but if not, it becomes an important practical issue that families must deal with as they decide whether or not to care for a patient at home.

Shoulder pain occurs in up to 80% of patients with stroke, and the onset is often delayed. The shoulder is a highly mobile joint that depends heavily on the rotator cuff muscles for stability, making it vulnerable to injury, especially during the flaccid period just after stroke. When the shoulder is unstable, pain-sensitive structures in and about the shoulder are easily injured, resulting in a variety of painful conditions which can limit participation in rehab subdeltoid bursitis, supraspinatus tendinitis, brachial plexopathy, and rotator cuff tears. Range of motion exercises of the shoulder should be focussed on. Every effort should be made to protect the shoulder during transfers, positioning, and wheelchair seating.

Spasticity is the term often used to describe the constellation of symptoms associated with increased muscle tone. A number of treatment options are available, including proper positioning, frequent stretching, and splinting. Oral medications can be helpful but have sedative and deleterious side effects. In many cases, botulinum toxin injection locally is helpful.

The risk of falls following stroke is a major concern. Almost 40% of patients with stroke experience at least one fall during rehabilitation and injuries are reported in 22% of falls. Falls are more frequent in patients with hemineglect syndromes (impaired awareness of stimuli on one side of the body), during transfers, in patients with cognitive impairment, and patients receiving sedatives. A major consequence of falls is hip fracture, particularly on the hemiparetic side, and may occur months or years following a stroke. This is partially due to bone density loss associated with immobility.

Post-stroke depression has a prevalence ranging from 20% to 80% but is often underdiagnosed and under-treated. Patients with depression have increased mortality and greater cognitive impairments compared to nondepressed patients. Depression is also associated with worse functional outcomes. Care providers should have a low threshold for treating patients demonstrating signs of depression.

What should be expected upon discharge from rehabilitation?

Whether a patient can go home after rehabilitation depends on many factors, including age, the severity of deficits, cognitive impairment, presence of incontinence, and comorbid medical conditions. However, the most important variable is often the family and social situation. Before returning home, one of the most important tasks is close communication with the patient and caregiver. Both need to be educated about the patient’s abilities and the tasks the patient will need assistance with. Several “hands-on” training sessions with a therapist can be helpful to ensure safe, energy-efficient techniques and to generate confidence in the patient and caregiver. The home may need to be adapted with equipment such as a commode, tub bench, cane, wheelchair, or other adaptive devices.